A middle-grade high-flying adventure of a boy inventor who sets out to build a rocket and prove the unthinkable—stars are real! With the help of a gang of working-class misfits, Evan must prove his home, the frozen planet of Pinth, is not alone in the universe while evading dinosaur-sized predators, and outwitting his Aunt Val and the evil Council of Ears. Can Evan change his destiny and reach the stars? 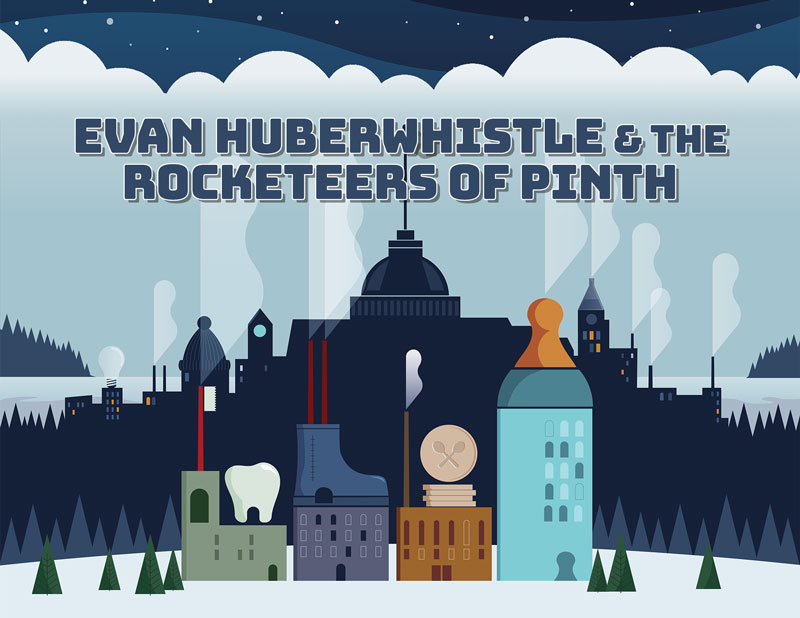 Meet Evan and his friends

Evan is tall, skinny thirteen-year-old with dusty blue eyelashes. Orphaned as a baby, he lost his beloved mentor/grandfather Huber Huberwhistle a year ago when the old inventor was attacked and eaten by a thwock. Shy, solitary inventor Evan is now the 35th Ear of Huberwhistle. He feels most comfortable when he’s alone in his attic bedroom, tinkering with motors, and inventing new things. Evan wears thick fur coats, rich woolen pants, white shirts, and fur-trimmed day jackets. He attends the private school for Ears and children of Ears known as the School for Children of Extraordinary Families where unfortunately, he is bullied due to a medical condition that causes him to giggle at the wrong times. Evan has no friends other than Breen. He knows he can’t bring Grandfather back, but he can restore Grandfather’s reputation by completing the old inventor’s most amazing invention—the rocket—a sled that can fly!

A crow – Evan’s only friend and a well-connected smuggler. Like all crows, Breen talks with a caw in his voice. His gray wings and purple tail feathers shed frequently. Breen is a proud member of the Rook Barook.

Kai, an orphan, is tough, working class kid, twelve years old, a full human like Evan, and determined social justice activist. She’s tiny. No taller than Evan’s shoulder. Instead of dusty blue eyelashes like Evan’s, her lashes are beigy-blue, the hue of a glacier’s heartstone. Her yellow-brown hair matches the dull beige uniform of her current undercover assignment—firemaid in Huberwhistle Hall. Kai belongs to the radical underground movement, known as the Starwatchers, Pinthians who believe in stars and are seeking to change Pinth. At her real job in the Real Milk factory, she’s the leader of a misfit group of kid workers. Kai is used to giving orders. Due to her beigy appearance, she often blends into the background, a trait that makes her an excellent spy. Kai is studying at night to become a before-e-ologist, a person who studies the Before and all that is buried under the snow. Her goal is to overthrow the Council of Ears and in particular, Evan’s Aunt Val.

Fun loving, hey man! Max Roscoe is a twelve-year-old wild ‘un, a subspecies of pongo, with orange freckles and orange fur around his wrists and neck. Max works in the Truth Department at Real Milk. Always asking what’s true, he’s nimble and slight in build. Like all wild ‘uns, Max is sensitive to harassment and discrimination. He takes to flying with ease.

Savvy Huck is a twelve-year-old canise with one brown eye and one blue. She has a healthy appetite and a blonde ponytail that bounces every time she talks, as well as a penchant for silly alliterative sayings like shimmering snowflakes and galloping gingkos. Savvy is a self-taught four click mechanic (5 is the highest level of certification) at Real Milk—she fixes all the milking machines. Ambitious Savvy loves science, mechanical engineering, and her little brother Wick.

Evan presses the button and a groaning motor raises the top shelf of his bookcase, a false cover. Underneath lay a row of hand-written notebooks. Thirty-six notebooks to be exact. Evan runs his finger over the curly wire spines, letting the tangy scent of citrus carry him back in time.

“Ah, Notebook 1. My first invention,” Grandfather Huberwhistle used say, chewing on his favorite yellow candies. “The measuring stick in Notebook 1 will tell us the snowfall without cutting a hole in the roof.”

Young Evan would fill his lungs with the tart smell of the candies. “No hole in the roof?” he used to ask. “Will the Council like that?”

“Tell me about ten,” Evan would say, running to the book shelf and grabbing Notebook 10.

Grandfather would hoist Evan onto his lap. “Excellent choice, my boy. The invention in Notebook 10 will add time to the Pinthian day.”

While Grandfather explained the physics of adding time, Evan would press his nose to the hourglass design on the page. “Why? Why should we add time to the day?”

“To help working families,” Grandfather replied. “Workers need extra time with their families. I call this invention the Time Expander.”

“Exactly, my boy. Because one day, I will fly the rocket to the Out Beyond and prove that stars are real.”

“Why?” Evan would cry in a raw voice, a worried voice. “Believing in stars is a crime. You’ll be boiled in oil. And then I’ll have no one. No one but mean old Aunt Val.”

At the mention of Aunt Val, Grandfather would hug Evan extra hard. “I’ll take you with me,” he promised. “I won’t leave you here. Besides, Maxwell P. Spag’s Book of True Facts is thousands of years out of date. If the Council would spend a few coins on my work, I could build them a rocket of their own. And then they’d know—the space above the snow clouds is full of gasses and oxygen, and winds, and most of all . . . stars.”

The doorknob, a pair of crossed spoons, clicks sideways. The door to Evan’s attic bedroom opens and a girl, a full human like Evan, enters, dragging a bucket of heavy kelio bricks over the threshold. The maid is no taller than his [Evan’s] own shoulder. And new. He’s never seen her before. Her yellow-brown hair matches the dull tan color of her Huberwhistle uniform.

But instead of proceeding straight to the fireplace and lighting the fire, the maid drops the bucket in the middle of his room and begins to wander. To Evan’s surprise, she marches to his map of the Huberwhistle estate and studies the drawing as if committing it to memory. Next, she examines his poster of Bottoms Robinsnow, the best snowballer of all time, with a questioning look as if she has a different opinion.

“Good snow,” she says when she finally locks eyes with Evan. Her lashes are beigy-blue, the hue of a glacier’s heartstone.

Shocked, Evan doesn’t answer. His medical condition, Gigglemia Extremis, makes him laugh when he’s nervous. And right now, he’s shaking. Evan would rather eat a sofa than giggle in front of the new maid.

Unfazed, she skips to the bookcase. “When I grow up,” she says, scanning the books on the top shelf, “I’m going to be a before-e-ologist. I’m going to study the Before and everything that’s buried under the snow. I’m going to win the Snow Bel Prize.”

Evan blinks. Not only is the probability of a firemaid winning the Snow Bel prize equal to—he runs the calculation—zero point zero seven, but her nose is two fingers away from Breen’s feathers. Gulp. If she heard Breen… if she sees the feathers…